Validor Starwing, also known by his nickname "Vale", is a purple dragon and the main protagonist of the main story Pure Light.

Validor is the third of the rare purple dragons, the first two being Spyro and Malefor. He lives in Warfang, with his true colors hidden by a magic necklage given to him by the professor, Takanobu, who is now deceased.

Validor is a very timid and shy dragon. He's always nervous around everyone except for his friends and family. But even around his friends, he can be quite awkward at times, always stumbling and tripping over his own feet. Vale doesn't have a lot of self esteem. He's not as smart as TJ, not as strong as Burner, and not as funny as Electroy, no, his talent is crashing after a flight. But he does have one strong point. His nerves. Validor never makes himself angry. When he's treated badly or his friends are scared, he can become scared (like most of the time), shocked, annoyed, sad, but he never gets angry. He also has great mental strength. He's able to use mind crystals to move his metal leg, which is mentioned by his friend TJ to be very difficult.

Most of this can be explained by the fact that he's a purple dragon. Validor grew up being reminded every day of his life how Spyro and Malefor became evil and he's terrified of becoming like them himself. He's incredibly paranoid about anyone finding out he's a purple dragon, afraid that they will kill him or even come after his mother and sister, the only ones who know his secret.

The main reason he never told his friends what he really is, is because he's afraid they will hate him. He learned to keep calm and collected because if angry, he might do something dangerous. He has no interest in discovering what he could be capable of and avoids it all together. Even properly training his disguise element, ice, is out of the question, this doesn't just make him weaker than Spyro or Malefor, but the average dragon.

Current: No natural elemental abilities. Has shown abilities in Dragon Time once

Former: Very basic ice powers due to neglectful training. All elemental powers were apparently neglected after his use of Dragon Time.

He's not very fast or strong, nor can he use his element well, so he's an easy target in a battle.

His metal leg can be affected by metal element dragons. If his leg is broken, he's bearly able to walk, rendering him flying to go somewhat faster.

Like with any mother and son, Validor has a strong bond with his mother. She's always worried about him and tries to make him feel more comfortable in a vile world. But it's hard for both him and her. They are both afraid of what the future holds for them.

Because of "Sangiunem Connexa" Validor and Snowfly are able to feel how the other's doing and always have a feeling of where the other is. Even though they might be miles apart. The bond between dragon siblings is described as something magical by many.

Validor loves his little sister dearly and will do anything to make her happy and protect her.

Validor always followed his father's advice without question. Hide who you are, even if it hurts.

All Kyron wanted was to give Validor more time. For what exactly is unclear.

Validor and Snowfly don't know their grandparents from the first class very well. Lemniscate looks a bit down on them for not being pure blood starwing dragons, but appreciates them nonetheless. They are thinking of taking both Vale and Snowfly into the Starwing tribe again as full members (their mother was banished for marrying Kyron, who's not a Starwing).

For a long time, Takanobu was Validor's person of confidence as he helped him through hard times when his father died. Takanobu was a very close friend of Validor who would always listen to him and reassure him things would turn out just fine. Validor had an immense respect for the professor.

Tori Jewelhorn has been Validor's friend for as long as he can remember. They both have very calm personalities and they enjoy being around each other, doing things their other friends would think of as boring. Like reading. Slowly Validor fell in love with her but he decided not to tell her because a relationship based on lies would never work out. TJ doesn't know the real him, and Vale thinks she deserves better.

Burner and Vale don't speak a lot. But this doesn't make their friendship any less strong. They just enjoy the silence. Validor enjoys watching Burner perform his fire training together with TJ and Electroy and will always support him during tournaments.

Even though Validor doesn't approve of all Electroy's jokes and pranks, he loves to hear him talk all about them and can't help but laugh. Vale often becomes the victim of Electroy's pranks, because he's so easily scared and clumsy.

Dinky and Vale aren't that close. But they always sit by the sidelines while the others play games with the rest of the class. They are never picked, so they have learned to enjoy each other's company while they watch the games.

Dorkus looks down a lot on Validor for being a lower class dragon, having only 3 legs, not being able to use his element well, etc. He'll often pick on him, but he never gets much reaction from Vale.

They hate him. He has no clue why. 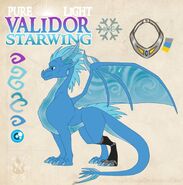 Disguise form (with the necklace worn) 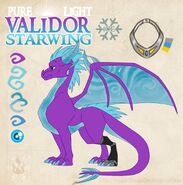