Ravah is sly darker, the one who thinks about ways to make someone really angry, so she could feed of their anger; an opportunist, taking any available chance to kill, if only to take a hold of her favorite organ of consumpsion, the heart (most of the time when she got the heart she leaves the body for others to feed on and kills others dragons for more hearts.

She kills adults and children alike (no age perference). When not out to kill, Ravah is more by her lonesome than hanging around with other darkers; only if a fight breaks out, she gets closer as being drawn in by the sounds or presences of anger.

She's a bit of a creeper, having a tendency to just sit and stare, unless in a feeding frenzy. She also has the habit of sharpening the redish beak tip on her snout to prevent it from getting dull.

She's smart enough not to pick fights with higher ups or beings stronger than her. Though she can be tricked quite a lot as well, much to her hate.

She kills in 2 different ways:

She almost doesn't use her element.

She feeds on anger.

Ice is one of the only few things that can prevent her guillotine horns from closing and severing heads. If aimed well, it can immobilize her movement.

Also long ranged attacks: most of her kill skills are close ranged, so if her target keeps their distance from her, she'll have a harder time dealing a killing blow.

Ravah appeared along with other darkers after the darkmasters rose into power. She attacked warfang and caused many families to be torn apart, this include Dorathia Jadenhorn's family. It was Ravah's actions that led to Dorathia to become a freedomflyer.

Ravah tends to avoid other darkers, but there are a select few she gets along with.

One of the rare few darkers Ravah seems to tolerate. She tends to team up with him as they both benefit from each others actions. Ravah follows his command without question.

She has an odd kind of obsession with her. She seemed to have taken a liking to Dorathia's feelings of anger and tends to target her more often then others. She enjoys causing her pain and grief. 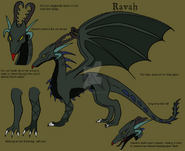 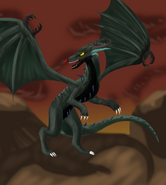 A headshot of Ravha before and after the corruption