She is.. strange. Hot-headed, egoistic, most of the time she is a heartless jerk, who likes to give orders, to enjoy the life in the 1st class district and mainly: flirting with various male dragons. She loves the attention of males, and hate all females who are prettier than her (and that's a lot). However she is also mischievous, she loves to prank the other females or the few males she doesn't like (Orhasso mainly).

She has a weak spot for children. She would do anything to have a real mate, a male, she can look up and having a child or children she can take care of...

She knows everything she need to know about her element. She can:

Her element is vulnerable to electricity and good against fire attacks. And it's really good for camuflage or... making her scales more shiny and smooth after washing off her mud.

She is also very strong and bulky. The shape of her horns make it possible to her to powerfully ram into her opponents, push them back and break bones. Her tail blades are also good to block attacks and break bones.

Since she is an earth dragon, she is not a good flier and her elemental attacks are limited while she is in the air.

She was born outside Warfang in a small village, before the Dark War II. When the war broke out, her village was attacked and many villagers died, including her mother. Her father and few other survivors flew to Warfang. Her father left her with his brother and his wife, who lived in the 1st class district, then he left for unknown reasons.

Quekka never saw him again. His uncle and his wife had no children on their own, so they loved her very much. Quekka liked the attention, but she missed her parents and her old, quiet life she had in the village.

She had no friends. Other rich children found her ugly, strange and clumsy. She always played alone, many times in the mud or in small puddles, another reason the rich children avoided her. She discovered her element that way too. Since that moment she became a prankster. She often covered the spoiled females in mud, usually when they were in front of males. She later even hid mud in their pockets or in their jewelry boxes. Eventually, one of her victims had enough and attacked her. That was her first elemental fight... and she won. A Guardian saw her battle and how skilled she was, so she became a guardian apprentice after that.

The new power she had in her paws made her the egoistic and flirty dragoness she is now. She looked for a chance to fight against other apprentices, especially females, and a chance to impress males. 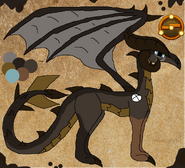