Plume Feathertail is a mother of Tori Jewelhorn.

Very obsessed with wealth and fame, cares little about anything else, even her daughter.

Plume Jewelhorn was born in a refugee family, that had worked their way up from the third to the second class district by the time she hatched. Her older sister Cirika had been familiar with what life was like in the third class district, so she had learned to appreciate their current place in society more than her sister. Anyone knows that life in the third class district is hell, but Plume did not. Her parents could affort to give their children more now. Both Cirika and Plume could now go to the higher class school.

Plume had always been drawn towards the wealth and power the heads of society had. She did anything to belong to the high classed groups. Really anything...

Eventually, wealth and fame became more like an obsession for her, she would become rich, no matter the cost. As she became an adult, she addented balls, parties and anything related to the first class district. She wore fancy assecoires and jewelery she "borrowed" from her mother. Like that, she fitted right in. And sure enough, in the end she got what she wanted. She met Zephyr Jewelhorn, a young business man. She did all she could to get his attention and please him. Zephyr couldn't help but fall for her stunning looks.

And like that, not much later they married. For Zephyr, a beautiful mate like Plume was a splendid symbol of his authoriy. Living in the first class district will get you anything you want. Money, power, women...

In a way, they both got what they wanted, Plume got her money, Zephyr got a hot wife. A shallow but balanced relationship. That is, until Plume loses her looks or Zephyr his cash. After the marriage, Plume cut all contact with her old family. She no longer wanted to be reminded that she once lived amongst lower creatures...

Plume cut all ties with her old family, including her sister, despite Cirika now being a Freedom Flyer's mate and receiving quite a sum of money. She still doesn't want to see her.

Plume found Zephyr a handsome dragon. But that didn't mean she was never attracted to any other dragon. And it isn't like Zephyr would never do the same with other female dragons.

They had one daughter, which Zephyr (since he's the one who always makes the last choice) named her Tori Jewelhorn. Plume wasn't that interested in her. And she didn't want to raise her by herself. That way, she wouldn't have time to enjoy the beautiful life she was living to the fullest. So she and Zephyr paid for a nanny and continued in their ways. It's not that Plume acted like Tori didn't exist, but she wasn't the most important thing in her life.

Plume is rarely interested in her daughter's whereabouts. Though she was incredibly annoyed when she found out Tori had two friends that weren't from the first class ditrict. She couldn't remember their names, but when it turned out that one of them was even a nasty digger from the third class she lost it. She screamed at Tori and forbit her to talk with them ever again. Though she was still too distant from her daughter to actually go and check if she did.

She had a few affairs with other rich dragons, including Doucheicus Blackclaw once, but those never lasted long. 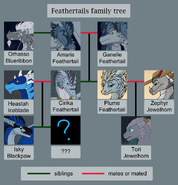