She's most knows as Tira, for her weird feature of black "tears" when she dematerializes back from the shadow form.

Tira is a very skilled halfer. However, she is unable to use a shadow breath.

Her instincts are mastered to the point that she automatically shifts into a shadow form whenever she senses danger. It is possible to maintain this shadow form for a day at maximum without changing back.

The shadow form is immune to all elements (except light) and physical attacks. However, as a shadow, she can't deal any damage.

Due to her wings being made of dark energy, she can't be brought down even if her wing arms are broken/destroyed. Dark energy will still allow her to fly.

Tira's mother was moving with a group of other creatures to seek shelter in Warfang in about 1560 year, when the group encountered a pack of darkers. They tried to defend themselves, but as the dragoness wasn't a fighter, she moved to hide to keep alive, hoping she wouldn't be noticed.

Too bad for her, she was spotted by a darker Korfeo (who was just a mere darker back then). He left her to die on her own, as both blood and the body violation seemed to satisfy him enough. But for some reason, she didn't die from the wounds in a few hours as it usually was. After the screams and roaring faded away, she decided to check the place of the encounter, only to find all her former companions slashed into pieces and partially eaten. She spotted one of healing crystals, which probably fell from someone's backpack and used it to heal herself. She would have to find a way to the city by herself.

Some time later she felt that she was pregnant with an egg, and it could be only from that unfortunate encounter. When the egg finally emerged, she was surprised to see it being fully black, just like the scales of the darker who violated her. It made her feel so sick that she was about to smash the egg, but reconsidered as the mother's instinct took over. The potential hatchling wasn't to blame, plus even if the egg was black, it was just a colour.

She kept it close, always careful to ensure its safety. And one day, when she was resting in a cave at night, the egg hatched.

The dragoness was greeted with a sight of a grey hatchling, who had a skull on its head and big yellow eyes. While she was staring at it, bewildered, it jumped and bit her front paw. The female let out a surprised yelp and threw the hatchling, smacking it into a closest wall. But it turned into a black mass when it touched the wall and fell down, dematerializing as the ugly hatchling. The dragoness wanted to do nothing with this spawn of darkness anymore, yet she couldn't bring herself to kill it, because it was "just a child". She walked out of the cave, only to meet 2 darkers who heard her yelp and came to investigate. As she attempted to get away, they caught and killed her.

When the darkers left, a bit full of the fresh snack, a small grey ball moved to the remains of the dragon. The hatchling actually followed the dragoness when she was walking out of the cave, as the smell seemed to attract her. It calmly watched the entire scene, unnoticed. When it reached the remains, it smelled it again, then curiously took a bite... found it eatable and devoured as much as its size could allow. Feeling full, it moved back to the cave to rest.

Later, the halfer started to move, but for some reason the growth was stuck for a few years, so she was appealing as a cute grey hatchling. She ate what she could find, lizards, birds, anything she could reach with her yet weak abilities. She could only hide in shadows. A few times she happened to meet some intelligent creatures who didn't seem to be afraid or disgusted with her, most laughed at how she tried to kill them, throwing herself at them to bite. However, as she learned, her roaring would always bring bigger creatures from around who would leave her food from the creatures she met. It worked until her growth kicked in, and she wasn't appealing as a cute hatchling anymore. She couldn't hide from the creatures who answered her roaring, and they were targeting her instead.

She was their new target. She had to fight. She spent the following years by mastering her element, so she would be able to stay alive and not be eaten. Tira didn't care about anything else back then.  As much as she tried to avoid open confrontations with the others later, it never worked 100% due to her colours, therefore she was beaten, hurt, sometimes so badly she was sure she'd die. But she didn't.

She did well on mastering her element.

Tira's arch enemy, whom she had to fight the most in the past. 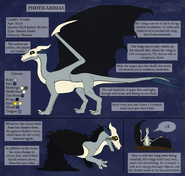