Medusa is one of a few commanding darkers of the dark army.

Quite talkative; likes drama and gold.

As her appearance probably confirms, Medusa's element is gold. And her name is a dead give away of how she uses it. This Darker cannot turn her victims into stone statues by looking them in the eyes. But by a mere touch of her claw or any part of her body, she can turn anything into gold. A glistening dead, so it might seem. (It is comparable to how the ice queen from Narnia turned enemies into statues.) if the unlucky one to face her happens to be out of her reach, she can still breathe a gold beam towards him or her and the result will be the same.

Are her victims to be lost forever? That depends. When someone or something has been turned into a golden statue, no magic can undo it. Not even Medusa can undo the spell. Only if her magic stops working the victim can be saved. But the only way to make her magic work out is by killing her...and if the statue is damaged or broken, the spell will be permanent... 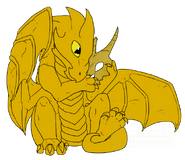