Lithia Faintwing is the Guardian of Nitrogen.

Knows everything there is to know about her element.

The Nitrogen element has many uses. It can be used as explosives(gas form), acid and liuqid nitrogen(liquid form) and... fertilizers. Lithia prefers the first two. The abilites listed below are just some of her abilites.

She can make invisible balls of condensed nitrogen and blast them at an oppoent. They can either explode on contact or she can detonate them remotely at her leisure.

She can expel nitrogen gas in an area and detonate it as a series of controlled explosions when ever and how ever she wants.

She Can change the density and structure of her element and condense it around anything and turn it into a bomb. She can use her prostetic hand in various unexpected ways to aid her when doing this(its rumored she willingly got her element resistant prostetic arm and made a number of modifications made to it to aid her in this whether this is true or not is unknown). She can create all sorts of bombs from liquid nitrogen bombs, to amonia bombs etc, and use them in a variety of ways.

She can expel a seemingly harmless gas in a large vacinity that is breathed in and while its in an advesaries body she can detonate them from the inside out in an explosion so violent it can blow them to dust. She can also impale someone with her claws and inject her element directly and then blow them up, but she rarley does this due to how barbaric it is.

On top of using nitrogen to create various types of bombs she understandly can breath it as if it were pure dynamite. She can level entire areas and blow mutiple darker to bits with ease and she can even control how big the exlposions are.

She can breath a blast of nitric acid that can inflict horrible burns and can cuase muscle damage, she also can use the moisture in the air to cuase incredibly painful acid rain.

She can use her element to create a sedative that can make even the strongest foes drop to the ground fast asleep. She can use this in an extremly large area but she mostly just uses it to calm her adoptive son semias down when hes havng night terrors...

Her arms is a modified prosthesis that she uses in tandem with her element and can amplify certain effects. The currently known abilities are listed below

Unknown. She never told anyone where she came from.

Her adopted son who she cares for dearly and hopes to rehabilatate him into the happy young dragon he should be rather than the scared broken shell she cradles to sleep every night, since shes the only person who doesn't terrify him. She is highly protective of him and anscestors have mercy on you if you endanger him.

She is very close with her aprentice and while she only talks when instructing her they have a mutual unspoken understanding of each other. Glimpses of the two lounging together after a training session have been seen on occasion.

Lithia with her adopted son 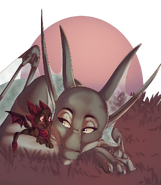 Lithia with her apprentice, Oria Cyantrogen