Korfeo was one of the Alphas.

He has "preferences" when it comes to fighting: if he has to fight a male, he will try to finish him as soon as possible; but when it is a female... he will spend quite some time with her, aiming to weaken her greatly. During the weakening stage, he will either bite or scratch the victim in order to taste the blood, and if he finds it good, he will wait till she's too tired to defend herself and then "embrace" her for a final bite in the neck. Just like in old vampire tales.

Sometimes he can even consider... doing some "stuff" to the barely alive lady. If he's done, he will not finish her as she will die from a blood loss very soon anyway. "A gift for entertaining" as he calls this "mercy".

If he finds the blood bad, he will act as with a male - by giving a quick death.

Sometimes he may toy with his prey in order to feed on their fear.

Also, he has a weird obsession with blood, always looking for something unusual. For example, a mixed dragon type blood... or even species... he has a dream of tasting a halfer's blood someday.

But his "perfect" addiction is Cynder's blood.

His element is shadow.

Skills and abilities, marked with '*', are exclusive to the Guardian level, which he obtained rather recently.

As a parasite darker, he feeds on the fear of his victims.

Korfeo can now expand his shadow and shadow form, making it cover quite an area, or shrink it.

He likes to turn one of his front legs into a shadow blade, which cuts as a real blade (due to making it material). But the fun part is that he can change the blade partially, i.e. making it longer or wider or even partially unmaterial.

Aside from usual suffocating and blinding effect a normal shadow breath has, Korfeo's also burns for some time.

He can empower his front paws with shadow fire and strike the enemy with it.

Korfeo can turn into a shadow, which is immune to all attacks. It's possible to make the shadow burn in the same manner as his wings, so he would be able to burn someone or something that touches him or he touches it, however it can be used for a few minutes only.

The Guardian level allows him to make any part of his shadow or/and shadow form solid. For example, by expanding his shadow over a surface, he can make spikes out of it; if he covers a part of a cave, he will release the spikes to pierce the enemy from many angles. It's a deadly trap with no way to escape.

This darker tends to feed on blood of dragons for... fun mostly. It gives a very small power boost in comparison with fear and dark crystals, so it's actually... useless. Yet he doesn't drink any blood, only "special".

The main weapon are his "wings". He can summon and twist it whenever and how he wants.

When he fights, he can use either extended or expanded version of it:

For flights he uses the expanded version of the wings.

Upon reaching the Guardian level, he is now able to make the wings partly solid at will, for example, when he hits with it.

Elemental light is his obvious weakness.

He can't use his shadow wings for more than a few hours, otherwise he needs to refill the energy by either scaring someone or getting close to dark crystals. Each refill allows to use the wings for a couple more hours.

Day light weakens him slightly, so he prefers to attack in dark places and during dark time of the day/at night, when he can use his powers at its fullest.

One of the first mutated darkers; he was supposed to have wings upon hatching, but mutations occurred during embryo development, and the wings never formed, same with the skull that became external.

During one of Freedom Flyer chases (see special "Bloody Darkers"), he discovered what he called a "perfect blood". The taste affected him so badly that he wanted to savour it again, but there was one great obstacle - Cynder's skills. He stood no chance against her as an Elite with Master level.

So he started training, exploring his skills more and more. Unlike before, when he used to avoid majority of fights, he seeked any possibility to use his element to unlock its full potential.

And once, Korfeo picked an Alpha - Azibo, luring him into a closest cave, where he pierced him with his shadow spikes, ending him. He was rather disappointed that it was over so fast as he considered a good fight.

He never strove to get an Alpha position, but as he had killed one, he had to take their place.

During one of random encounters, Korfeo discovered that this lady's blood tastes rather good for a darker. Not as good as normal dragon's, but there is something... unique in its taste, making him crave for more. He stalks her sometimes for another dose. 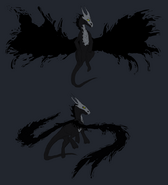 Korfeo with a shadow blade 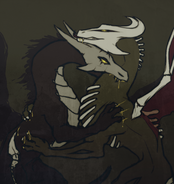 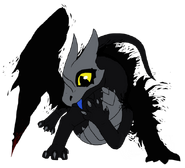 Korfeo emerging from the shadows