Kiwa Groundshaker is one of Beta Team Freedom Flyers.

Kiwa is rather talkative and likes to get attention. He also tends to show off himself and his skills, waiting for a praise, but usually he's just ignored when he does it. He gets used to it slowly.

When he's on the mission, he takes his job seriously and sometimes has fun upon the use of his elemental abilities, especially if he accomplishes something good, such as trapping and deactivating a golem.

He can cause earthquakes and mess up the ground under his paws pretty much, causing the enemies to lose balance or fall into newly made crevices (often closing 'em up, which results in a porridge of enemies... gah). The crevices are usually not very wide, but if it’s required, he can make one enough for a snake golem to be stuck in.

Aside from causing small earthquakes and crevices, Kiwa can manipulate the ground, for example, creating platforms of any height. He can do it even without touching the surface, even airborne. However, his manipulation is limited by only changing the shape of it.

As he can send vibrations, he can feel it too. Similarly to a bat, he senses the vibrations on hard surfaces if he concentrates well, therefore, with a quick analysis he can determine the approximate weight of a thing, or a being, either if it’s right before him, hidden from view or moving. But even without the analysis of a weight, he can tell if there is something/someone, especially if it’s unseen (in darkness or covered by something).

The only problem is that the thing or the being must be touching the surface. For example, if a bat hangs on a cave wall, he will sense it, but if it flies through the cave, he won’t.

"Foreseeing” doesn’t work on shadow beings when they are in a shadow form.

Being airborne, he can only manipulate the ground a bit.

After flights he needs more time to recover.

Kiwa hatched in Warfang near the end of the Second Dark War. All his childhood was, to simply put it, good.

His father was a duo-breather, with earth and earthquake as his elements; he was some high rank in the Warfang army back then, and he really loved his son. But considering how weak(?) the green boy looked, his father thought that he needed good training and more food; so, he supplied his child with it. His mother was caring and had a habit of praising him for every little thing he did: "Oh, Kiwa, you made your first little crevice! It's so cute! You're fantastic", etc. It heavily affected his character.

His father's sister had a place in the government or something, and even when King Warfang ruled the city, she was corrupted with greed and rarely visited his father, unless it involved money, obviously. When Ember took over the throne, she, unsurprsingly, remained there. She was bad, but she was... useful for some cases, so they kept this weird family connection.

As his parents preffered to live in the 2nd class district, he attended the same school as many other children of his age. He happened to be Isky's classmate, one of many.

He liked Isky for her diligence, because he knew her father was a Freedom Flyer, and she tried hard to become one, too. Well, in his opinion, war wasn't a girly thing at all, but even if such a nice dragoness wanted to fight for freedom, he wanted too.

Once he told his father about his goal, he got a praise from him as well. He had to train hard and pass the exam!

Yet, he failed the Freedom Flyer exam. He had a perfect score in everything except the fighting test.

This hit him badly, and he was depressed for some time. His father, though, pulled the connection with the aunt for a small bargain. He asked her to take Kiwa in Royal Guards, with about half of his son's wage going to her. Obviously she accepted such a bargain.

Kiwa wasn't happy with this job at all. All royal guards were as corrupted as his aunt, and it bothered him greatly. He felt his potential being wasted.

And then, soon enough after this appointment... the Bloody Dawn happened. As other royal guards, he was forbidden to leave the city and only allowed to aid the wounded... well, bring it to the healers or something. His parents volunteered to fight, and oh how badly he wished he could be there!

Once the dark army ran away, he watched the survivors come back. How pathetic he was, a warrior, standing behind the walls under protection of these who died. He hated himself for being so weak. If he only could pass the last part, he would be outside! Fighting the dark army with the others... and Isky. Thankfully this ice dragoness was alive, brought back by a blue fire dragon, a relative of hers.

But his parents. They were gone.

He had to get into Freedom Flyers. Some time after the massacre battle, he heard of a blue dragon survivor who was said to be a good trainer. Kiwa found him, and it was that blue fire dragon who carried Isky in that day. The earth dragon is still embarassed to remember how terribly he begged to train him better, and how humilating it was. Tired of begging, Xarei agreed though. The blue dragon didn't pity him at all and hit with all he had, so he had a lot of bruises before he started to catch the movements on. He progressed.

It was funny how he managed to pass the exam from the second try. His teacher wasn't a Guardian, not even an earth elemented dragon, and yet he taught him how to fight and use his element. He was so thankful that he offered a half of his now Freedom Flyer's pay to Xarei, who politely declined his offer.

Just as his father taught him, "if someone is useful, you have to keep the ties with them", Kiwa does his best to remind his aunt that he exists and can be as useful as she is to him. He despises her for being corrupt though.

This ice girl is his love interest since school. But no matter how much he tries to earn her attention, she keeps ignoring him. 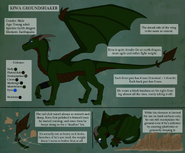 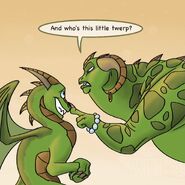 Kiwa (on the left) and his aunt Meredith (on the right)