Once kind and shy, now a true, egoistic, power hungry monster. She loves attention and wealth. She also often bully the 3rd class civilians, that's part of her job, she says. She also has deep feelings for Tier, both for his look and for his personality.

- She can create a pretty thick mist, she can hide in it pretty well;

- She can fire a green energy ball, it causes plants to grow where it landed;

- She can move vines and roots, however, it's rescues great concentration;

- Wing and tail spikes are really sharp, she can cut really well with them.

- While being airbone, she can't control plants, only fire her energy ball and creating mist;

Soon after Dark War I, a small group of young dragons found an abandoned village. It's unknown what happened to the little village, but the dragons from Warfang couldn't find anyone, except a few days old, dirty, hungry orange dragoness. They took her to Warfang and a female from the "rescue team" decided to adopt her together with her mate. The two loved their new daughter and they named her Irissa, a rare orange flower which only grows at hot springs and Orangscale, due to her bright, orange scales.

Irissa was a child with plenty of problems. She was first shy and kind to everyone, but everything changed, when she discovered her elements. Her parents thought she is a fire dragon, but not only her element wasn't fire related, but she was a duo-breather, having both Nature and Mist as her element. After discovering her power, she started to think she is above everyone, she loved to bully the young dragons from the lower 3rd class and she always tired to hang out with 1st class children. Later she even started to bully the "unworthy" 1st class civilians. She once got a fight filth a mud dragoness and she got beaten really badly. Her heart broke, when she learned, that the Mud dragoness was chosen to be a guardian apprentice. An ugly brat, while she, the pretty Irissa, who have so unique elements, was still in the 2nd class district. That was the moment she decided to be an officer.

Thanks to her elements, her egoistic personality, she was quickly accepted to be an officer. She loved her new power, and she loved to terrorise the 3rd class civilians. She soon moved away from her adoptive parents. She doesn't hate, in fact, she is really thankful, that they adopted her, but she no longer wanted to live with them. She once meet a handsome dragon, called Tierphoon Skyblade, and she immediately decided to get him. However, he wasn't interested in her, and Irissa got plenty of "rivals", who also loved Tier for his beauty. She stayed in Warfang at the Bloddy Dawn and watched in horror, when the small group of survivors returned. She soon learned that Tierphoon is alive, but due his mental injuries, he was unable to work, lost his house and ended up in the 3rd class district. Irissa decided to help him and offered him to live in her house. Tier accepted it, but she could see the hatred in his eyes. Irissa tired everything to make him happier and to make him like her more, but she failed. Tier eventually regained his strenght and continued working as a teacher in Warfang school. Irissa soon learned, that he tries to collect enough money to move away from her. And not only that, but a certain mud dragoness has feelings for him, and Tier seems to feel the same way. Now she tries everything to make him change his mind.

She loves him realy deeply, and she is saddened by the fact, that Tier actually hates her. She knows why Tier doesn't like her, but she simply can't accept the fact, that she is a jerk in his eyes.

Since the fight between the two, where Quekka won and later decided to be a mud guardian, Irissa hates her. Her hate just grow toward her, when she learned that Tier talked with her and probably both dragons have feelings toward each other. And Irissa is pretty much powerless against a Guardian. 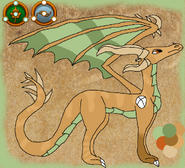