Edit
watch 01:54
Obi-Wan Finale - The Loop
Do you like this video?
Play Sound

Hunter is passive, sarcastic and skeptical about almost everything. He’s not an easy person to talk and doesn’t get along with most people. He prefers just to switch between lazily laying around and fighting. But neither does he mind just sitting somewhere high up and silently judging you're very being like the cat he is.

This Cheetah warrior is not afraid to fight something much bigger and stronger than him. He’s not reckless, but he’ll fight you! Hunter doesn’t stand back from a good challenge either, he’ll complain about it the whole way, but he’ll do it nevertheless, figuring out some way to do the job.

Hunter can launch arrows from almost any possible distance and hit his target precisely. The damaging of his left eye forced him to readapt his aiming and shooting style, but in the end, it made him even more skilled.

He has 2 daggers he uses. Not for combat, as they can only be used at close range and leave him vulnerable.

After he joined the freedom flyers, Hunter has learned how to sword fight. He can now use 2 long swords for close combat. In case he runs out of arrows. But he prefers to keep his distance nevertheless. So he rarely uses his swords.

Hunter is able to peform basic hand combat without weapons.

He's a very good climber and has great stamina.

Hunter doesn't wear an armor nor does he have a natural one, so he's vulnerable to almost every attack. Physical and Elemental. He's good at dodging and has fast reflexes, but the danger remains.

However, he's good at dealing with parasite darkers, as it's become nearly impossible to mentally break him.

Before the Dark War III[]

Hunter was born in the cheetah village, located in the same region of Warfang city. He was always a bit of an outsider. He tried to be part of the group and community and interact with the other cheetahs his age. But he was smaller, weaker. An easy target to be picked on. Socializing was very important in the village, if you're a loner, you'll be nothing but a miserable millstone around the neck for the others. Basically, just an extra mouth to feed. Hunter wanted to be like the bigger cubs. Big and strong, fast and skilled. A warrior. Maybe even a leader. But the other cheetahs never gave him the opportunity to prove he was capable and talented too. So whenever the others of Hunter's age group would go hunting together. He'd stay behind in the village. Day-dreaming and being bored out of his mind.

Eventually, when he was a little older, he'd go exploring by himself. Reaching further beyond the Cheetah borders as the time went by. He grew fascinated by the dragon culture. He was awed by their cities and advanced way of life. First he'd only hang around close to the smaller dragon villages, but eventually, he'd go bolder, try to talk with them. He was amazed by how open the dragons were and how friendly. He was a full grown adult by the time he learned about the existence of the legendary dragon city Warfang and it's temples. Hunter told the others of his village about his discoveries. How they could learn from them and their culture. But the reaction he got was quite unlike what he had hoped for. The older Cheetah's hated the dragon race. They shouted out at him how he was a traitor for interacting with those 'lizards'. The older generation of Cheetahs was familiar with the 1st dark war, in which many of their kind had died because of the dark masters forces. Hunter was too young, but they hadn't forgotten.

Hunter tried to reason with them, especially with the new chief of the village, the man he had grown up with, one who had always picked on him, Chief Prowlus. He had quickly picked up on the elders' way of thinking and distrusted the dragon race immensely. He was absolutely not up for reason. But Hunter had enough. Enough of their close-minded behavior, rules and the whole place in general. He left the clan right then and there, yelling that they would see!

The young Cheetah travelled to Warfang city and remained there among the large cultural diversity. A stranger more or less, no one would see the difference. He got in touch with a local archery school and discovered his amazing talent there. He was so good at arching that he was asked to work for the first class dragons. That's where he got in touch with the guardians of old; Ignitus, Terrador, Cyril and Volteer...

After the start of Dark War II, Hunter was sent by Ignitus to find Spyro and Cynder when they didn't return. He searched for them for 3 years, determined that he’d finally do something right and prove that he was strong.

Eventually, he successfully found the two legendary dragons in the catacombs of the old mountain of Malefor. All there was left to do was escorting them Warfang city, they would have to pass through the region of Hunter’s ‘old life’ but he didn’t care. However, the trio (or 4 counting good old Sparx) was captured by none other than Hunter’s old clan!

Hunter was scolded for bringing Dragons and dangers into the Valley of Avalar, but he defended his actions and reminded Prowlus that Spyro was their only hope in defeating the resurrected Malefor and that the dangers were already around them. Prowlus was still as stubborn as he was years ago and refused to let any of them go. But when the village came under attack by Grublins, Prowlus reluctantly released Spyro and Cynder to help fight them off but still didn’t allow Hunter to go. Hunter wasn't released until Spyro and Cynder recovered a missing member of the village, Meadow, and Prowlus apologized to Hunter for his actions. Prowlus offered Hunter the use of the forbidden passageway to reach Warfang, and in return, Hunter offered an invitation to Prowlus that he was welcome to join them at any time.

Hunter brought the dragons successfully to Warfang as they battled together against the dark armies. Meanwhile, the village surroundings became more and more dangerous as Hunter had warned the Cheetahs. Chief Prowlus couldn’t deny it anymore, this wasn’t just the dragon’s war anymore. This was everybody’s war. The whole world was involved. Prowlus gathered his best warriors and left to Warfang, to war, helping the race they despised to much. But when they finally faced the dark armies, the losses were crushing. It was only when Spyro and Cynder defeated Malefor that they managed to make it back. Only a few warriors made it back...but they were safe. The war was over. Hunter returned to their village and was accepted as one of their warriors. It was like a heavy raincloud had finally vanished from above their heads…

...but they were only in the eye of the storm.

Without warning, countless dragons appeared out of no where and started ravaging the village. The Cheetah’s didn’t understand. How could they betray them like that after all the sacrifices they made? They had fought side by side! The Cheetahs fled in chaos, many were killed. The survivors found each other and hid themselves deep in the endless ocean forests. Hunter found them too but…

Hunter left the clan again, out of shame. He stayed in the area, as an outcast. But never talked to any of them again. All he could think of was how he couldn’t believe it. After everything. He couldn’t believe Spyro had turned evil and resurrected Malefor. It didn’t feel right. He hadn’t known the purple dragon for long, but he just knew this was never meant to happen.

Hunter and the other Cheetahs remained hidden in the forest for 2 years until they were finally discovered by darkers. Hunter was the only one who could escape them, but not without getting badly injured himself. Every single cheetah he had known was dead now. And yet he kept walking. Straight ahead, not knowing where he was going and not caring. His life was over, the dragons could come and get him now.

But before that could even happen, Hunter ran into a giant, named Gustave, and his pet Roc. Gustave didn’t even know about dragons attacking and the world starting to collapse. “So that explains all those tiny lizards stinging me the whole time....” He said. Gustave and Hunter talked for a long time. Hunter relieved his whole story upon the two strangers. He just had to tell somebody. He felt so hopeless. He wanted to prove himself, but there wasn’t even any one left to prove himself to! Gustave then reminded the Cheetah that the only person who’s opinion matters was yourself. It didn’t solve any of Hunter’s problems and sadness, but it definitely made him feel a little better. The roc then told him that Warfang was a safe haven where they could all go to and protect themselves from the dark dragons. Hunter then learned that the dragons were attacked too and that the things that attacked him and his village were some other kind of species that people called ‘darkers’. He was thrilled to hear that they weren’t betrayed after all. With this little ray of hope the trio left together to Warfang.

However, not long after, they were attacked by countless darkers and several Alphas: Poisonbeak, Medusa and Korfeo. Neither Poisonbeak nor Korfeo could do anything against Gustave, for he was by far too gigantic for any of their attacks to hurt him. However, Medusa launched a full attack at the giant and Gustave was turned into a golden statue, Hunter and the Roc were absolutely devastated and tried to fight them all off. This proved to be impossible and they were both badly injured. The Roc managed to grab hunter and flee from the darkers. But right after they lost them they collapsed and crashed down.

(Un)luckily, they were found by a patrolling division of the dragon army, then still under command of General Doucheicus Blackclaw. Blackclaw accused the two of them to be species and if not, they would be nothing more than a miserable millstone around the neck for the others. Basically just an extra mouth to feed. The general would have ordered to kill them if Cynder hadn’t stepped in between them. Hunter couldn’t believe it. She was still alive and on his side. The dragon he had helped so many years ago. But he was too tired to say anything to her.

The discussion between Cynder and the general resulted into a massive battle between the two dragons. Cynder managed to beat Blackclaw and took Hunter and the Roc back to Warfang. Hunter recovered there and Cynder invited him to stay with her and her allies. Since he had nothing better to do, he did so. Eventually he was one of the first people to join the Freedom Flyers when they were created by Cynder and Casi. He’s still part of the team.

Hunter was one of the few to survive the infamous clash of Bloody Dawn. But not without consequences, in an attempt to protect one of his fellow teammates, Adelee, after she was shot down, his left eye was injured by an explosion and shockwave created by Spyro. Hunter lost consciousness after. When he woke up again, back in the city, he got to hear that his eye had been badly damaged and he would remain half blind. This only motivated him more to refine his arching skills, he refused to be taken down by it. Hunter is still the best archer in Warfang and possibly the whole world today. 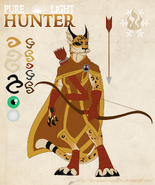 Hunter as seen in the main comic (RusCSI)