Glazeo is quite observant and generally silent, collecting information for further analysis in order to know how to deal with things (a habit and a skill from the past). It allows him to improvise very quickly.

He's well versed in verbal manipulation - something that illusion users require for a good usage of their element - but doesn't utilize it unless a situation demands it, and even so, he'd do it to resolve a conflict, not to put pressure.

His eye markings naturally confuse and distract, especially when glowing.

He knows how to be stealthy and is rumoured to be able to use his feathers for lockpicking.

Former criminal who was imprisoned a little before The Corruption for hypnotizing and robbing, but actually not for robbery - accidentally got wronged for a murder he didn't commit. 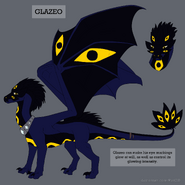