Edit
watch 01:54
Obi-Wan Finale - The Loop
Do you like this video?
Play Sound

Electroy Thunderfang is one of main characters of Pure Light comic.

Electroy is known for his cheerful personality and enjoys playing pranks on his friends and classmates. He cares a lot for his friends.

Average electric abilities. Probably if he didn't skip his lessons, he'd be a master already.

Average life of a rather spoiled child, which made him carefree.

Electroy's friend, whom is also often a victim for his pranks, because he is easily scared and clumsy.

Another of Electroy's friends. She doesn't always approve of how Electroy acts though.

They are each others' opposites, but still great friends. Proof that opposites attract. 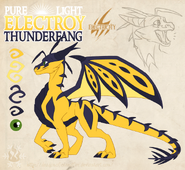 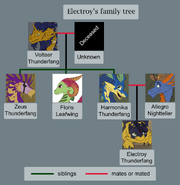