Curati Crystalclaw is the Guardian of Healing.

Grumpy old lady who doesn't like to be bothered, better left alone. Some think that she's so old that she loses her hearing, but actually she just ignores them.

Curati is a powerful healer due to her Guardian level. After she saved Zeus' life, many started to believe that she can save any case, even bring back from the dead. She doesn't comment on it.

Her element can only aid, it's not for attacking or even defending.

However, despite her age, she still can hit quite well with her spikes and horns.

Not much is known, except that she had a mate and 2 sons. Her mate passed away from age, her sons were killed: one - during the Bloody Dawn, the other - by his own son, her grandchild.

She wasn't close with him, especially considering his personality.

Curati adored Kyron greatly and was deeply heartbroken by his death. 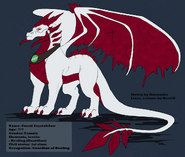