Back when he was mortal, he used to believe in the Ancestors and Spyro: that Spyro would not go evil because he could balance himself, and that the Ancestors would guide him, should anything occur.

His opinion on both is currently unclear.

As a mortal, Ignitus was a Guardian of fire and wielded the element very well. After death, he took over the Chronicler position and inherited all skills the former Chronicler had.

Chronicler can alter the White Isle as he wishes, that's why it looks so different in comparison to what many heard it to be.

Father and former mentor of previous purple dragon, Spyro. He perished during Dark War II while protecting his son and his companion Cynder on their way to find and fight Malefor.

After death he was chosen by the previous Chronicler as a worthy heir and replaced him on duty. 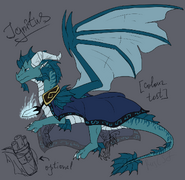