Burner Phoenixwing is one of main characters of Pure Light comic.

He looks up at the old warrior guardians; so much he wanted to become one himself. Though he might have a name at home, his origin will always be a thorn in his side. He's from a poor family, which resulted into a complete disintesrest from the current guardians to make him an apprentice. No one would like a kid from the Third Class district to smother the wealthy reputation guardians achieved over the years. This and the harsh life conditions in the slums gave Burner a distrust towards any authority and reach people in general.

Burner is one of the most talented fire breathers of Warfang, with a record of 28 elemental tournaments won.

He can set his wings and tale ablaze mostly for a boost during a flight; also it can pack quite a punch. It looks cool in his opinion.

By heating up his claws to extreme temperatures, he can slice through objects made of metal and other hard substances.

With both his parents perished during the Clash of Bloody Dawn, Burner has to take care of his three little brothers by himself. Combining this with school, work and training is very difficult for him. This also explains why his siblings have quite bad manners and happen to have a few criminal intentions.

Burner is one of Validor's friends.

TJ is Burner's friend as well. Once she has even offered to financially help them out, but Burner refused. He didn't want anyone's pity.

Whenever he gets the chance, Burner hangs out with Electroy. People say opposites attract each other. Burner complains a lot about Electroy's childish behaviour, but he'll stick around. He secretly enjoys the carefree sphere radiating off him, making him forget the problems he has at home. 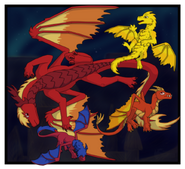 Burner and his siblings 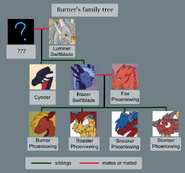