She is smarter than average, and she uses her intelligence to outwit her opponents. She doesn't wants to get injured in battle, so she tries to kill your opponents as quickly as possible.

Acramesia love to hide in ruins and to sneak on prey from behind. She has a fragile body and tries to kill her opponents fast to avoid injuries. Her element Dark Nature gives her the ability to produce a sticky black substance, which she can spit at her foes. It slows it down and makes it an easy target. Additional to that, it might inflict poison, if Acramesia consumed something poisonous before.

She sometimes seeks the company of Darkers, who have a fire element, since her tar is easy to ignite. At the moment, she travels alongside Rshanras, even though she she thinks that he is pretty dull. But his fire makes a very effective duo out of them 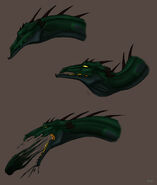